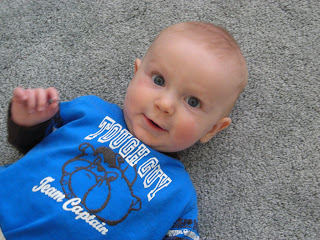 Due to our trip to CO {more to come} this is a little late....Grant is 6 months!!! Man I love this kid! He has been so much fun lately and I know it will just keep getting better...until potty training ;) 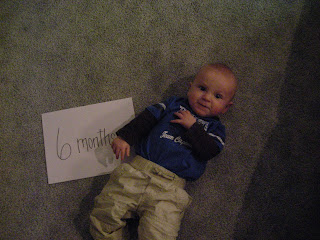 *when he is tired he will suck on the top of his left hand while holding his right ear
*likes to blow bubbles
*still prefers to be outside, while in CO he would stick out his tongue and just take in the cool crisp air
*rolls and rolls and rolls
*usually ends up on his stomach while sleeping
*likes to be held and look around at everything
*has fun and smiles when i bounce him on my lap
*likes books
*puts EVERYTHING in his mouth 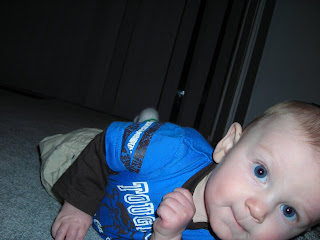 There are a lot of reasons why I love Grant but I have to admit that having a baby is the best excuse to get out and do fun things. David and I are no strangers to family events (circus, hayrides, festivals) but now that Grant is in the picture it doesn't seem so silly for us to go! On Saturday we went to this cute little pumpkin patch/corn maze...sure it wasn't the greatest but since this kid could stare at his hands for 5 hours we weren't really too picky!

ooo scary Frankenstein---look he even has fingers growing out of his neck! 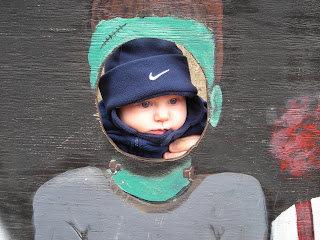 checkin' out the corn 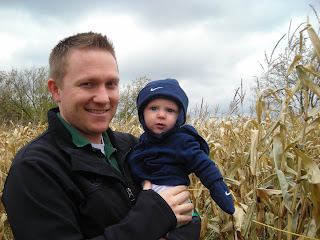 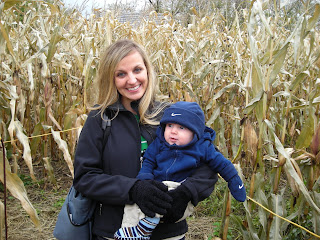 G-bug and his new best friend 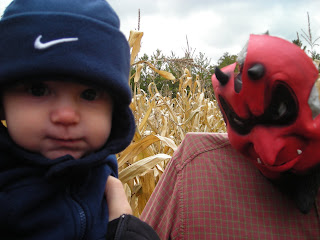 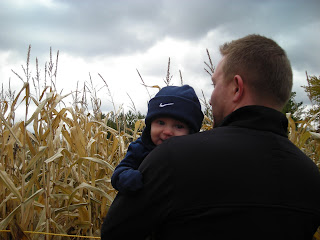 Grant has been a little oh how do you say...uh...difficult today. The poor kid just would NOT take a nap. He wanted to be held, cuddled, kissed etc. etc. I have yw stuff, errands, people to meet etc. and today just wasn't a good day for him to be high maintance. As I sat here with him FINALLY asleep on my shoulder I read a comment from President Hinckley that helped me to understand the importance of my time with him and my calling as a mother. Leave it to Pres. Hinckley to give such a great reminder!

"You have nothing in this world more precious than your children. When you grow old, when your hair turns white and your body grows weary, when you are prone to sit in a rocker and meditate on the things of your life, nothing will be so important as the question of how your children have turned out ... Do not trade your birthright as a mother for some bauble of passing value ... The baby you hold in your arms will grow quickly as the sunrise and the sunset of the rushing days." President Gordon B. Hinckley

and with that being said guess who is awake???
Posted by David and Jodee at Wednesday, October 14, 2009 8 comments:

Since it was so frigid out today I decided to warm up and run the Children's 8k race. What a fun, easy run downtown. I wasn't very familiar with the course and all day I've been doing the "what if" game but there's always next year and I had a fun time so that's all that matters. There were tons of runners and the crowd was great-cheerleaders,bands,goofy outfits etc.

So how does one train for a 5 mile run? Easy you first have to run a decent amount of miles, get proper rest/nutrition and leave your ipod in the stroller! Yep I was about in tears when I realized what I had done! David and Grant escorted me to the bus (they drove the runners to the starting line) and kissed me good bye. I was anxiously waiting for the warm bus to get there when I looked at my empty frozen hands!!! I didn't bring my phone because I did't want to carry it around (I mean who am I going to call while on a run? seriously.) so I had to quickly make friends with strangers and use their phones to call David. After two attempts I started sprinting back to the car in hopes that he would be there, just then I saw the last of the buses getting ready to leave...back to the bus once again empty handed. Stink.

While on the bus I made another "friend" who let me borrow her phone, I could tell she thought I was nuts for wanting/needing my ipod so bad but whatever, not all of us grew up with imaginations while we run lady. I finally got a hold of David and we decided on a place to meet during the race. I have never loved technology more than in that moment. My testimony of cell phones/ipods and my garmin was greatly increased in those few minutes! 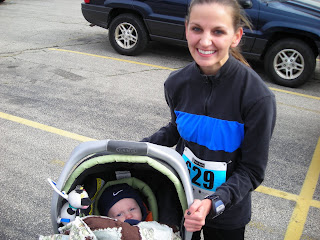 Grant and I after the race...poor kid was so cold David had to buy him a warmer hat and gloves...Nike of course! Thank goodness we were downtown with all that shopping near! He still enjoyed being outside with his daddy and was so happy all day! Oh and yes this is my brother's old running shirt from when he was in H.S. or maybe at Ricks! I guess you could say I take care of things ;)
Posted by David and Jodee at Saturday, October 10, 2009 4 comments:

Last night for YW we had a music appreciation night. One of the personal progress goals for the girls is to learn how conduct a song. Growing up I remember my mom wanting all of the youth to learn how to conduct and she made sure my siblings and I could properly lead music. I'm so grateful for that and that I was able to share my knowledge with the girls last night. We had a few of them perform for us too, it was so great to see their talents! I was a little nervous about filling our time so I convinced my sweet and talented husband to come wow us with his guitar skills! Oh and his great voice too! He did a great job, it's always fun to hear him play.

I'm so grateful for good music-especially primary songs/hymns-they always lift my mood and help me to feel/think better. Some of my favorite childhood memories are surrounded by music. My parents encouraged (never pushed) us to learn the piano and the one time I wanted to quit I just sat back and listened to my amazing mother play and I was instantly motivated to become better. I know I will probably never play as well as she does but I'm thankful that she continues to learn and share her talent.

Whenever I would be driving around with my dad listening to The Beatles/Clapton/The Eagles he would always point out the "walking bass", or the harmony etc. Often he would ask me to identify what instruments were playing, how many guitars there were, and what timing the song was in. Now whenever I'm driving or hear a song on the radio I always figure out the timing and I too have a love for a good "walking bass line".

I'm grateful that I have in-laws that love music and encouraged their children to participate in singing/performing. They all put me to shame! I love that David still plays his guitar most nights and now with Grant in the picture it is so fun to watch him reach for the guitar, yet sit back in enjoy watching his dad. David and I hope that we can instill a love of music in our children just as our families did.
Posted by David and Jodee at Thursday, October 08, 2009 3 comments:

cut me some slack kid

Why must Grant fill his diaper like 5 seconds after I change it? Seriously? Um I'm not a fan of that behavior G-man.
Posted by David and Jodee at Tuesday, October 06, 2009 4 comments: 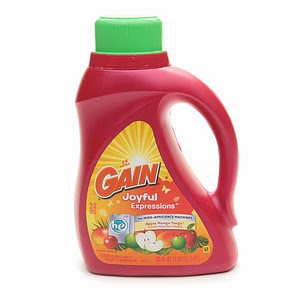 As if I needed one more reason for G to slobber on my shirt-I bought this fab smelling detergent. I always love clean laundry but there is something about putting on a shirt and taking a giant whiff of this scent that just sets the mood for the rest of the day! mmmmmmm........
Posted by David and Jodee at Friday, October 02, 2009 1 comment:

Boy howdy it was chilly on our run this morning. Grant finally fell asleep but now that I think about it he might have just been too frozen to move around in the stroller. Speaking of frozen, yesterday I literally ran over a dead mouse...poor little guy. Wait what am I saying? Poor lil' guy? Poor me and my shoe! That's gross...moving on.

Ok can I just say how much I love fall-even if it only lasts 3 days! I have always been a summer girl but there is something about all the pretty colors/smells/parties etc. I love mildly-chilly days where the sky is still blue and all you need is a little jacket. However now that Grant is in the picture I'm turning into a freaked out mama who is constantly worried about how hot/cold he is. He loves being outside and we try to get out everyday. I hate to burst his bubble but I'm afraid our time outside is coming to an end. I'm going to need to dust of my creative thinking cap and come up with some fun indoor things to do.

Anyway....I've decided that I want to make something pumpkin-y every week for Oct-Nov. I tried to do this last year but it seemed like something came up and some weeks didn't work out. I think I'm just going to make this a Sunday tradition but since today is the first day of Oct why wait until Sunday? I've got a few recipes that I'm excited to try but any suggestions would be great, so feel free to leave a recipe!
Posted by David and Jodee at Thursday, October 01, 2009 1 comment: