Last week we went out to Utah for David's sister's wedding. It was beautiful and I loved seeing both my family and David's. I am one lucky girl to have such wonderful in-laws and that we were able to make it out and see everyone for a few days. Everything was really nice---well besides the fact that I didn't try on Grant's suit and he ended up looking more like Chris Farley as a Chippendale! I was pretty much the worst mom/daughter and basically had my parents watch Grant all night. When I was around him he was just hovering over the candy bar. Sheesh kid. 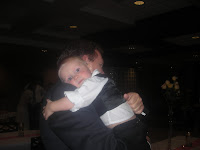 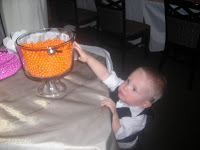 Is it just me or does it seem that EVERYONE lives in Utah? It's impossible to visit everyone.Luckily we were able to spend some time with some of my faves! 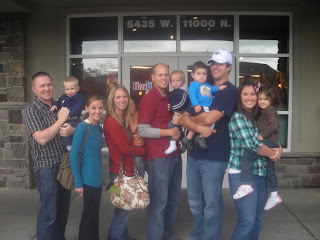 The wedding was on Friday and after the reception Grant acted like he had never been in a hotel or set foot on a bed and was WWIILLLLDDDD! I was running the Provo Halloween Half marathon Saturday morning and was needing to get some sleep. We finally kicked him into bed in the bathroom and got a little shut eye. A few hours later my alarm went off and all of us were up :( bummer...
I had been so excited for this race. It had been a few years since I ran down Provo canyon and it was perfect running weather. On the bus a few girls were talking about how crazy runners are. I have had people tell me I'm nuts for getting up so early to go for a run but I never really thought of it until that moment. Are runner's crazy? On my long bus trip up the canyon I had time to ponder this question. And yes runner's are in fact crazy.

As the race went on I was absolutely certain that runner's have lost all manners and normal thought processes. Let's explore the things that happen on race day.
-who in their right mind PAYS money (and sometimes a LOT) to get up in the wee hours and go running? sure you get a t-shirt but who really wants a 100% cotton shirt with a bunch of  businesses on the back? this race shirt was actually pretty good i must say.
-lose toenails and inflict injury upon their body
-no need to wash hands after using the lovely porta-potties
-no biggie if porta-potties are unavailable....plenty of bushes to go around
-who cares if there are three big barrels of trash right by the water station....ditch the cups on the ground
-sweatshirt getting too hot? why not just toss it?
-no place to put your GU wrapper? again what's wrong with the ground? 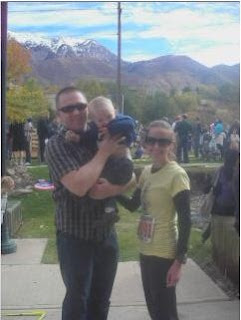 I'll admit I did a handful of such actions but hey those precious seconds on the race clock are just that-precious! I ran better than expected but not as well as I could have. Oh well I had a great time. A lot of people dressed up in their Halloween gear. I didn't make a costume in time so I just wore my Michelle Tanner "You're in big trouble mister" t-shirt. I was able to see a handful of friends during the race and that was awesome. For sure a memorable race that I would love to do again sometime. BTW-this was the best picture we could muster....sadly I don't think a "before" race picture would have been much better!
Posted by David and Jodee at Tuesday, November 09, 2010

That sounds SO FUN! And yes, runners are crazy. Yes, I must be one to think that your race sounds FUN! We need to have a reunion one of these years in Orlando and do the Disney Princess Half. That, would be fun. Miss you! You look amazing Miss Skinny. Grant is adorable.

I'm trying so hard to be a cute runner like you. You look great! Running is so hard and I'm amazed at how tough you are!

I reiterate my stance that you are the tiniest. Also, I totally agree with you about the runners' behavior during the race. It was crazy! I DID try to get my cup into the cans, although there was one time, oh right around mile 10, that I tried to make it in the can, missed, and didn't bother picking it up. I had a few guilt pangs about that.
Grant is the cutest!

I love that picture of Grant trying to reach the candy! I love that kid. We can't wait to see you next week!