Sheesh I've been a little on the lazy side of blogging these days. Tuesday was David's birthday, I hope he had a fun day. To kick off the morning Grant woke up (too excited to sleep I'm sure!) at 3:30 am which meant that David was up at 3:30 as well, hum...what a thoughtful present Grant, thank you! After David left for work Grant and I decorated the house with balloons and streamers. Ok Grant just crawled around with his tongue hanging out while I did all the work. It was quite the psychedelic trip for him but once his eyes adjusted to everything I think he had a lot of fun chasing the balloons and watching me pop my head through the streamers and ribbons like every 5 seconds. We went out to dinner that night and had a fun time as a family. We love you David!!! *No Grant is not wearing capris...just the way he is situated!* 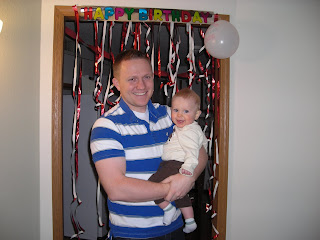 Well today Grant turned 9 months and I can honestly say this was the hardest yet best month by far. I was either giving him kisses and kisses or setting up my ebay account...I was thisclose to putting him up for sale multiple nights. He was sick for a few days and just when I thought he was getting better he ended up having a double ear infection. It was hard to know if he was really sick because he was always happy, well in the day at least (that's where the millions of kisses were given). In fact when I took him into the doctor he was acting totally fine, just like when you take your car in to the shop it just magically works again and the mechanic thinks you're nuts! Anyway he is finally better! Hooray!!! His check up is next week so I will get his stats then. We love you baby G! 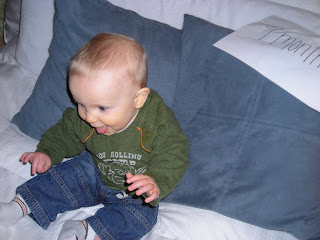 -army crawls EVERYWHERE! it's a good thing there are like 3 places in my house he could be, everytime i turn around he is somewhere else.
-he says "dada" a lot but hasn't quite figured out who it is...i like to pretend he says "dada" over "mama" because i always say nice things about "dada" to him;)
-laughs a lot
-will choose my boring clear water bottle over any fun new toy
-likes to feed himself
-gets really happy when elmo is on

a little light reading....making sure to read the home teaching message by the end of the month! 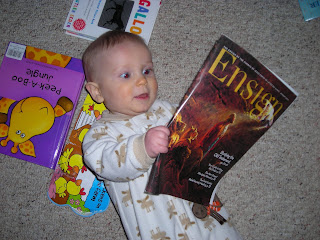 this pretty much describes the last month....reaching and grabbing anything and everything! 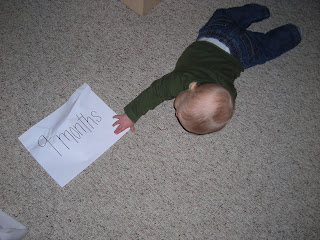 It's all good that Grant's wearing capris, if anyone can pull that off, he can. :)

(And Happy Birthday to David!!)

That is THE cutest picture of the two of them. Glad to hear that the big 3-0 was a success. And have I ever told you how adorable your little boy is? I'm serious, he is SO cute!