Well let's see....we went to Craig (for like the millionth time) over Memorial Day weekend. Grant had fun playing with the dog, seeing family, getting dirty etc. etc. We have some friends who own pigs, chickens, geese...basically anything smelly. We thought Grant would love visiting the new baby pigs so we took him out there. He ended up being interested in the rushing river by their house instead. Why must he always be so curious in the exact thing that we do NOT want him to be interested in? I swear if we were showing him the river instead he would run right over to the piglets! It was still fun to do something different. 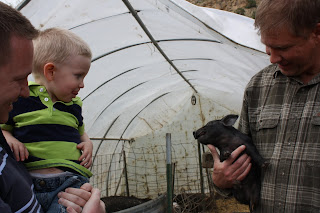 It's been so nice and sunny lately yet I feel like we've been inside a lot. Why? I have no idea-maybe it's because Grant blisters up at the word "sun"-actually it's because he'd stay outside all day long if I'd let him and since we don't have a backyard I don't want to be one of those creepy park people. *Remember-if I want him to play at the park that pretty much guarantees that he will play in the poopy sandbox (which btw why are those still around???) ,the gutter or with busted glass or something.* What have we been doing instead? Well Grant helped open the milk and then used the stringy thing to use as glasses and then a lovely headband. Wow talk about resourceful! 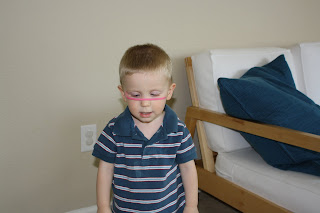 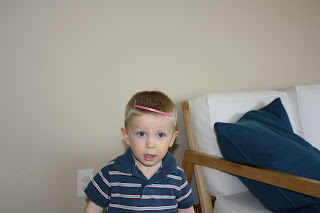 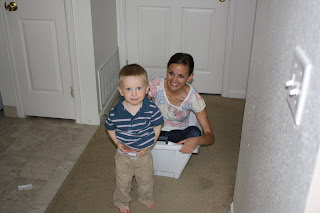 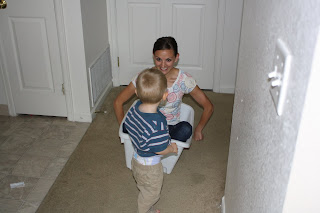 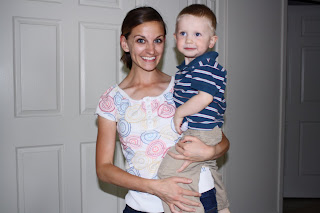 CUTE SHIRT! Darling Mom! Fabulous Grant! A couple here just told me that they are either naming their boy Grant or Graham, so cheers for good names! :)