Today was a whirlwind of a day. I ran the Strawberry Days 5k and then we hung around Cedarburg checking out all the little stands before the rush of people came. Grant did so well just chilling in his carseat. All good boys deserve something right??? 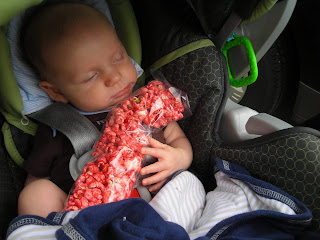 Then this afternoon we went down to Chicago for the BMX Dew Tour. Our good friends Brandon and Chad were down there, their company was one of the sponsors. Brandon had some major hook-ups and let us hangout in the RV with some of the riders. It was interesting carrying Grant around with all of these guys-they were really fun with him though. 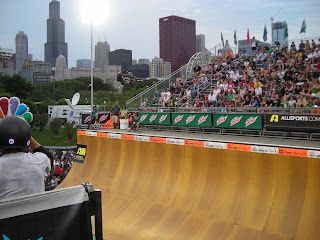 We had passes that allowed us up where they riders were during the finals and it was crazy to see them just standing right by us and then grab their bike and head off, then come back and act as if nothing had just happend. I overheard some of the camera crew saying to make way for one of the riders and as soon as I saw he was filming him for tv do you think I moved out of the way? And miss my moment of fame? Heck no. Anyway when we got home we watched it on tv and I'm totally famous now. I'll be signing autographs from 9-4 on Monday;) 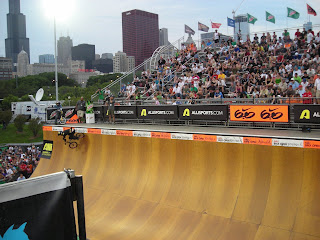 You're so funny Jodee! What a fun time.